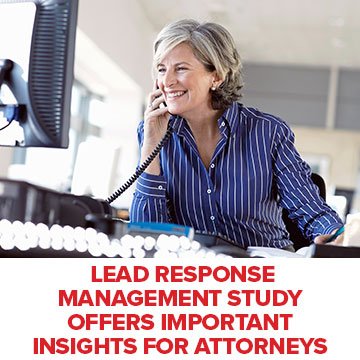 Lead Response Management (LRM), in partnership with InsideSales.com, has developed a lead response management study that looks at the best days and times to contact and qualify leads, while highlighting the importance of following up with leads quickly. The study has some key takeaways for attorneys, who can use its findings to determine the best times to reach out to prospects.

Researchers with LRM looked at three big questions in the study: 1) the best time of day to reach out to leads, 2) response rates based on how long it took for sales people to make initial contact, and 3) the best day of the week to contact and qualify leads.

A matter of timeliness

Even more interesting is the fact that continuing to call a lead after 20 hours have passed could actually hurt a firm’s ability to convert that prospect into a customer. While researchers were not completely convinced, there’s evidence to suggest that every call made after the 20-hour mark could actually contribute to turning off the lead from doing business with the attorney. Thus, lawyers who constantly call sales leads on a daily basis for weeks on end may be doing more harm than good — and are probably wasting their time in doing so.

Noting this significant drop in response rates based on the passing of just a single hour, LRM researchers decided to break up the first three hours into five-minute increments. They found that the odds of qualifying a lead decreases significantly after a half-hour compared to five minutes—and it even drops by about four times between five and 10 minutes.

In short, the study results indicate that literally every minute counts when contacting and qualifying leads.

According to the study, Wednesdays and Thursdays are the best days to contact leads via telephone, with Thursday having nearly a 50 percent higher success rate compared to Tuesday, the worst day for doing so. Thursday is also the best day of the week to qualify leads to gain more information about each individual — about 19 percent more effective than Friday, for example.

Looking at the numbers, LRM researchers believe it’s possible that people are less likely to make commitments right before or after the weekend, making the middle of the week better for reaching out to prospects.

Next, researchers examined whether or not the time of day made a difference in terms of lead contact. Here, there were some mixed results. It appears that the time between 4 and 6 p.m. is the best time to make initial contact with a lead, with about a 114 percent greater rate of success compared to 11 a.m. to 12 p.m., for example. However, the hours between 8 to 9 a.m. and 4 to 5 p.m. are the best times to qualify a lead via telephone.

With these results, LRM researchers suspect that people are less likely to make a commitment right before lunch, and that earlier and later in the work day are likely the best times to make calls.

What can attorneys learn from the Lead Response Management study? For one, it’s important to jump on prospects right away, calling as soon as possible after receiving them. However, lawyers should also take note of the best days and times to reach out to and qualify leads to ensure they give themselves the best opportunity for success.

Mark Shepherd is president of Ngage Live Chat, a company that works with attorneys and law firms to provide real-time connections with prospects. He has helped thousands of legal professionals convert more of their online visitors into potential clients.