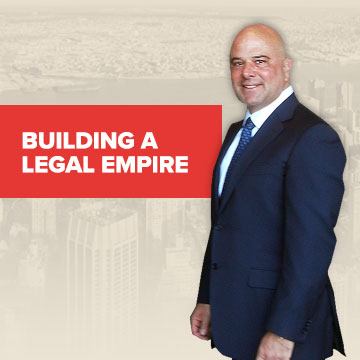 This interview with Anthony Licatesi of the New York law firm of Rubin & Licatesi, P.C., is the first in a continuing series of interviews with attorneys who have successfully grown their legal practice into a business empire.

Getting a foot in the door

Attorney Anthony Licatesi has always had a mind for business, starting in high school in the late 70s when he became one of the first nightclub promoters in New York City. By doubling revenue at the establishments he worked with, he was able to pay his way through New York University Stern School of Business where he took marketing and management classes. Working with various venues and businesses, Mr. Licatesi was frequently exposed to the legal aspects of the service industry and became passionate about the law.

That passion led him to attend Hofstra Law School, where he was given the opportunity to help others, litigating cases for indigent and elderly clients through a program the school offered. As a third-year student, he received an offer from a large Manhattan law firm, but decided that he would prefer a position with a smaller firm where he could grow professionally and see his hard work pay off. When he learned that Cooperstein, Beck & Rubin, P.C. had recently hired another student as an intern, Mr. Licatesi insisted on an interview anyway. Once in the door of that personal injury and real estate law firm, he convinced them that his combination of skills and work ethic made him the right choice for the position. Today, that firm — now Rubin & Licatesi, P.C. — bears his name.

Once he joined the firm, Mr. Licatesi worked hard to cultivate relationships with existing clients, putting in the time and effort to become a partner. To help expand the firm’s practice, he leveraged his personal and professional networks while also reaching out to the financial banking industry. The firm never relied on advertising, instead allowing honest and diligent work to speak on its behalf. These qualities helped the firm grow through word of mouth and referrals from other attorneys.

The firm’s commitment to its clients is partially based on advice that Mr. Licatesi and his partner, Richard Rubin, received early on in their careers from the Honorable Joseph A. Suozzi. A New York Supreme Court justice who served as a mentor to the young men, he impressed upon them that clients will always return if you “do the right thing and treat them right.” Today, Mr. Licatesi takes every opportunity to share that message with law students and new attorneys.

While the firm’s staff grew to 80 during the real estate boom of the early 2000s, size was never part of Mr. Licatesi’s equation for success. “I don’t define success by personal wealth or what I’ve attained,” he says. “I define success by my clients’ gratitude when I’m able to help them — and the gratitude I feel for having the opportunity to do so. I know it may sound a little corny, but it really is just about helping others, knowing I’ve been able to change people’s lives for the better along the way.”

When the mortgage crisis struck in 2007 and 2008, there was a precipitous drop in demand for real estate attorneys in New York, and much of the firm’s business dried up. Timing could not have been worse, as the partners had just purchased a new building. To survive, the firm refocused its real estate practice on foreclosure defense — helping those who were misled by the bad practices of predatory lenders into borrowing more than the equity they had in their homes.

The firm reduced its staff to 25 people and dedicated the practice to servicing existing clients. The remaining staff worked diligently to keep the practice afloat. Mr. Licatesi believes that by treating his staff as well as he treats his clients, the best and most dedicated employees have stayed, many for more than 20 years.

Even during the worst of times, the firm’s phone kept ringing with new work. Mr. Licatesi attributes the firm’s survival of the economic crisis to the same factors that allowed it to grow in the first place. “We just practice honestly and diligently,” says Anthony Licatesi, “and our client base continues to fuel our business.”